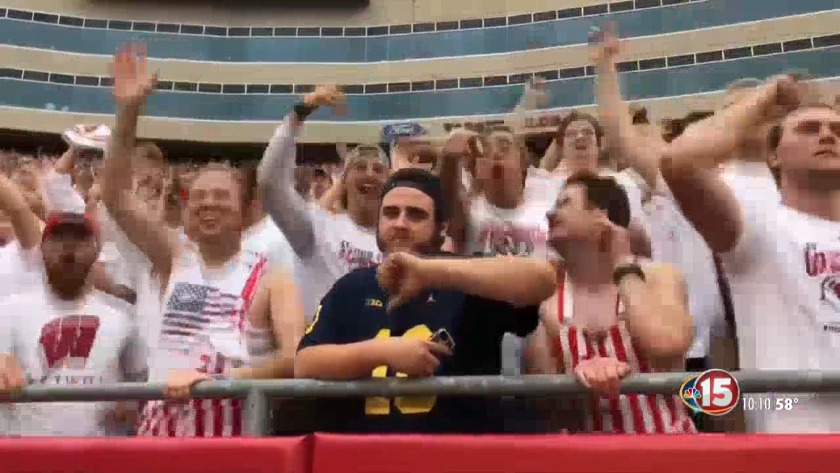 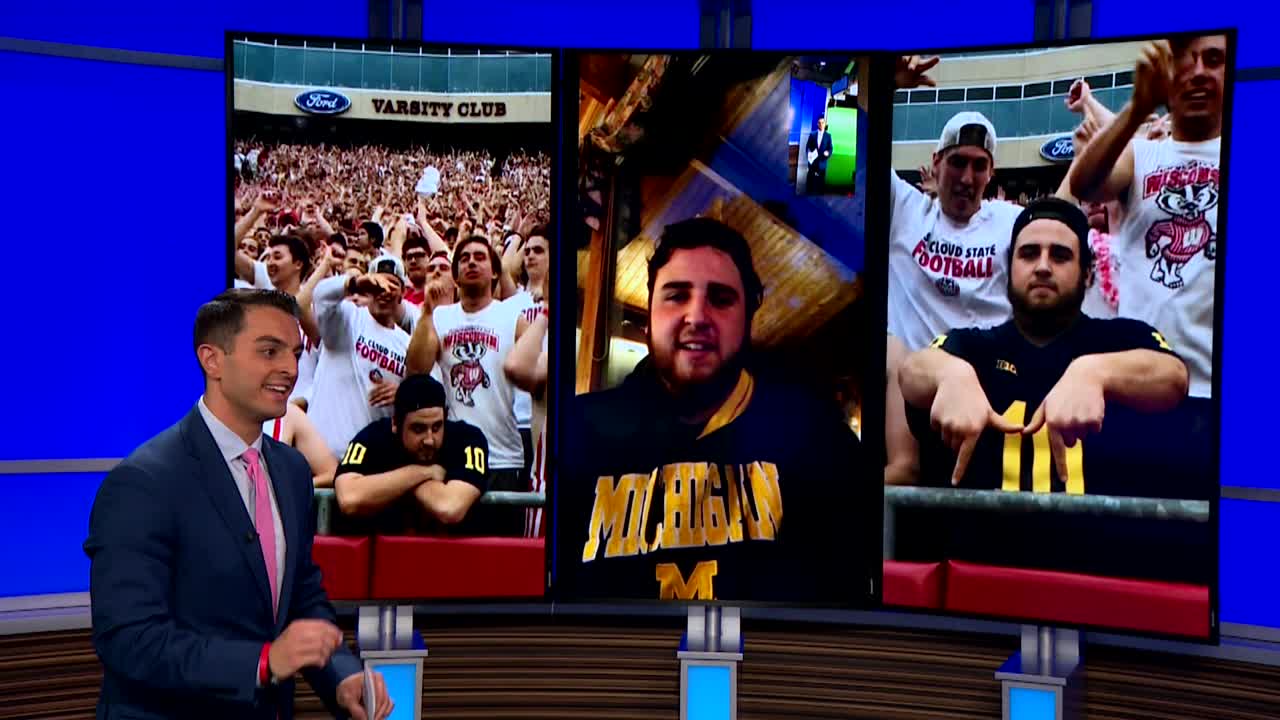 In the video, the fan can be seen at Camp Randall Stadium surrounded by jumping, excited Wisconsin fans as the Badgers ran through the Wolverines 35-14 in what many consider an upset. Prior to the game, Michigan was ranked #11 and Wisconsin #13.

Monday night, Balekji FaceTimed with the Michigan fan, Ben Janowski, to talk about the now-viral moment.

Janowski, a 16-year-old high school football player from Menomonee Falls near Milwaukee, said he wanted to watch the game from the student section at Camp Randall, in part, to experience 'jump around,' the tradition between the third and fourth quarters when fans dance to House of Pain's 1992 hit single, "Jump Around."

"So I took out my phone [and] took a little video of everything. Everyone jumping around. I just went along with it. I was not having a good time at that point," said the unflinching Wolverines fan.

Janowski got the tickets through his friend, who is a junior pre-law student at UW-Madison. They arrived to Camp Randall at 9 a.m. -- two hours before kick off -- and were deadset on getting the front row. Ben's moment at the game was made months before the schedules came out.

"My mom and I have volunteered for this organization called WAAGR, it's a dog-rescue nonprofit. Someone wanted a dog, so we drove the dog to Mondovi, Wisconsin. Turned out, the wife and husband had a son that went to Wisconsin. Unfortunately, I was wearing a Michigan sweatshirt that day and he was trash talking me and I'm like, 'I really want to go see the Wisconsin Badgers vs. Michigan game."

Ilya, the junior pre-law student at UW-Madison, promised Ben he would get him a ticket for the Sept. 22 game and, sure enough, his friend pulled through.

"[We] got there at nine o'clock to get to the express lane to get to the student section and we pulled through. I didn't really have a choice because he wanted front row and I just had to follow, tag along with him, but I mean I was there for the experience. I wasn't there to trash talk or anything. I was just there to enjoy a good football game."

When Jump Around started to play, "I wanted to experience Jump Around because I know that's a huge tradition at Wisconsin. So I took out my phone, took a little video of everything. Then I saw a guy filming me and I thought, 'hey, I could play this off'. And I just went along with it."

When the Michigan Wolverines were down 35-8, Janowski hit the lowest of college football fan lows and then his iconic moment took place.

Janowski said he learned that the video had gone viral on the way home from the Badgers-Wolverines game.

"I got in the car on the way home, and my friend Gabe texted me. He said this is Barstool by the way, so I said this could be anything," Janowski said.

The biggest sports media outlets, including Barstool, House of Highlights, and ESPN all shared Balekji's Twitter post of Janowski's moment in the crowd.

"And then everyone just everyone started texting me and I'm like 'wow' is that me on Barstool? And I'm like, 'mom we got to pull over to get some internet, I got to see this,'" he said.

"So it's, everywhere I go, I've been definitely noticed and its just, it's just unreal."

So how did the Menomonee Falls native become a Michigan fan?

"My grandparents on my mom's side are from Michigan. They were always Michigan fans growing up. Her cousins have been Michigan fans... I was raised a Wisconsin Badgers fan, until I learned a little family history. Then I'm like, might as well make my choice and go with Michigan."

While Janowski has heard from people far and wide about his viral moment, Monday evening he said he was still waiting to hear from his favorite team in Ann Arbor.

"Unfortunately, they have not reached out to me. But I'm hoping things change and they do. But again, I just got to play along with this."

Sad Michigan fan? Nope, try dedicated Michigan fan. Loved catching up with my man @ben_janowski1 after his viral moment on Saturday. I had so many questions, and his answers were hilarious. Tune in tonight at 10 to @nbc15_madison to hear from Menomonee Falls’ “Michigan Man” pic.twitter.com/lQjuZPrA1d

Badgers win their first true test of the season.

This Wisconsin defense has been absolutely smothering. Matt Henningsen once again ending a Michigan drive. pic.twitter.com/3LEEjSj2Gs

Man Cardinal & White stripe out sure does look pretty. Jack Coan squirts through to make it a 21-0 lead, #13 Wisconsin over #11 Michigan. pic.twitter.com/dBry0xJFZi

Bakhtiari HS Coach: he was lazy but recommitted and became great

Bakhtiari HS Coach: he was lazy but recommitted and became great