Suicidal patients spend hours in police custody before getting psychiatric help. Could a law help fix that? 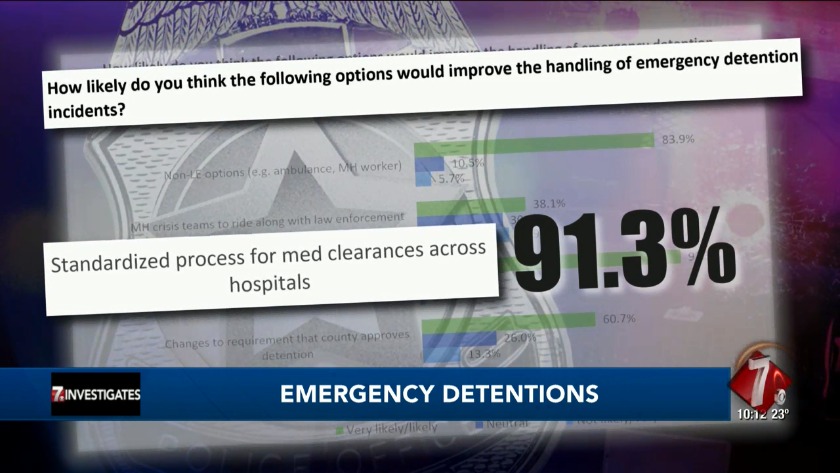 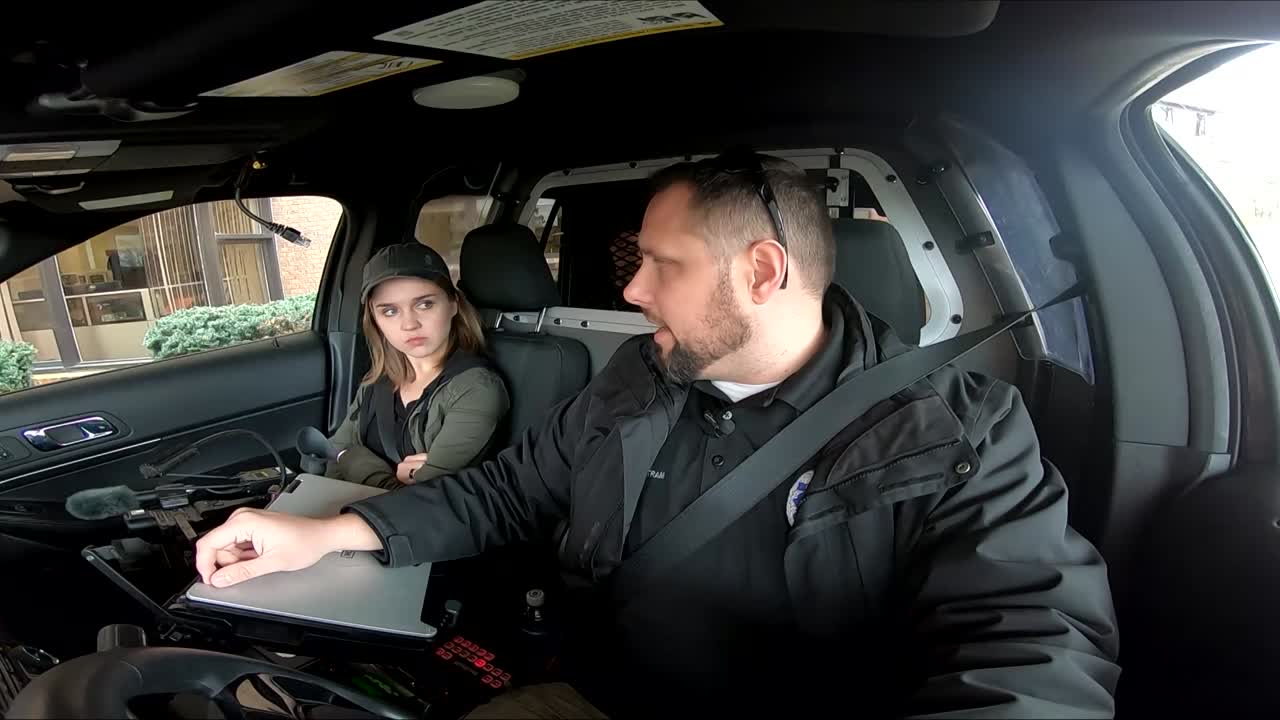 That’s the average length of time a Wausau resident experiencing a mental crisis can expect to spend in police custody before getting psychiatric help. The longest emergency detention in 2019 lasted more than 100 hours—with another handful of calls reaching into the range of 20 hours and above.

According to research published Thursday by the Wisconsin Department of Justice, the average across the state is just slightly lower at 8 hours, using incident data from 154 law enforcement agencies in Wisconsin.

Emergency detention is a form of protective custody allowed under Chapter 51 in state law, referred to colloquially as a "51:15" by Wausau police officers and others. Every state shares some form of law allowing for a person to be taken into custody against their will if they pose a danger to themselves or others due to a mental health crisis. It’s also the single most concerning issue for Wisconsin law enforcement, according to that same DOJ research, due to its impact on agency budgets, lack of resources, inefficiency, and overall impact on civilians.

Civilian impact is something that NAMI facilitator Melissa Leininger can speak to firsthand. She attempted suicide in 2017, waking up three days later in the Intensive Care Unit of Aspirus’ Wausau hospital—groggy and dizzy. She was escorted by police to North Central Health Care—getting into the back of a squad car right after waking up from the lowest moment of her life.

Her emergency detention didn’t reach nearly the lengths of the average in Wausau, but she remembers the effects all the same. It wasn’t the WPD officers’ demeanors, which she remembers as polite. It was the process itself.

“When you're in that state, you can't help that; it's not your fault,” she reflected. “And it's something that shouldn't be treated as criminal.” After recovering from the suicide attempt, she went on to join NAMI, where she helps facilitate programs for others who have experienced similar—and who have been through emergency detentions much worse than hers.

Wausau police officer David Bertram serves on the crisis assessment response team—or CART. He’s paired with a mental health specialist from NCHC, and together they or one other two-person team are personally involved with most of the emergency detentions occurring in Wausau and the Marathon County Sheriff’s jurisdiction.

“We do very blunt questions,” he explained of the process by which they determine whether to initiate a “chapter”, or 51:15. “’Are you feeling suicidal?’ ‘Yes, I’m feeling suicidal.’ ‘If you were to kill yourself, how would you do it?’ ‘I don’t know.’”

“That right there? Changes everything,” Bertram said. If a person has a clear plan for suicide, that’s when a 51:15 could be initiated.

“[They] won’t be under arrest, but won’t be free to leave either,” he explained.

That’s when the clock starts ticking on a process that often stretches into hours, taking one or two officers or deputies off patrol. If beds are available at a mental health facility like NCHC, the process usually isn’t longer than a couple hours, Bertram says. But if the person is a juvenile or NCHC is full, chances are they’ll need to be police-escorted to Winnebago Mental Health Institute in Oshkosh, almost two hours away from Wausau. That's happened to 75 of their 129 emergency detentions in 2019, as of September.

Farther north at the Oneida County Sheriff’s Office, the impact is even greater. Not only are they farther away, but they have far fewer in-county mental health resources than Marathon County.

“We just don’t have a facility that has enough beds to meet the demand of mental health that we have in our region,” patrol captain Tyler Young with the OCSO explained. “It’s not uncommon that just one commitment can take 10, 12 hours…and we can get several commitments a night.” For a department with a minimum staffing of 3 deputies and usually not more than 5 or 6 deputies on the road, that nearly always means calling in two deputies—their policy for a 51:15 transport—for overtime.

OCSO had used up their overtime budget by mid-July this year, largely due to emergency detentions—and it was the same story last year.

It’s not just the transports, which are usually a 7-8 hour round trip for two deputies from OCSO. It’s the time spent waiting in an emergency room while a doctor runs tests and makes sure that a patient doesn’t need physical care before clearing them for a mental health facility. And that’s where the overwhelming majority of law enforcement agencies in Wisconsin say improvement is needed, the DOJ research study shows. In a survey completed by 354 chiefs and sheriffs in Wisconsin, 91.3% replied that a standardized process for medical clearances across hospitals would improve the handling of emergency detention incidents.

“That [medical clearance] process in itself can take anywhere from 4 to twelve hours,” Young told 7 Investigates. “I do not believe it’s a very efficient process.”

Young and Bertram broke it down further. Mental health facilities around the state define for themselves what a medical clearance looks like. In Wausau, Bertram says a clearance for NCHC often goes quickly.

"We've worked hard with our law enforcement and hospital partners to agree upon some basic standards," Scudiere explained. "Occasionally there will be the complicating factor or complex situation. But, you know, I have heard people from around the state have had difficulty with medical clearances with various out of town options."

Doctors knowing each other locally leads to better relationships of trust, Scudiere said--all of which can help make the 51:15 process a little smoother.

But for the state facility Winnebago, Young and Bertram agree. “It’s always a battle to get a patient down there,” Bertram said.

It’s because officers say that, for example, a young person with a clean bill of health can face the same complexity of tests and screenings as an elderly diabetic person.

But an area ER director who requested to remain anonymous isn’t sure standardization would fix the problem, explaining that other county facilities are trending further towards stricter rules modeled after Winnebago’s process.

“When a patient arrives to an Emergency Department with an acute psychiatric condition and the request is for medical clearance, county and state mental health facilities have come to expect a full physical with many lab and radiology exams,” the director wrote in an email to 7 Investigates. “Many of these tests are not medically necessary in the evaluation by the ED Provider. If the Emergency Department does not do the all the tests or treatments that the county or state mental health facility require, they will not accept the patient for the needed psychiatric care.”

The director explained that there are different schools of thought on the process, and a standardized process may not reduce wait times as hoped.

Ultimately, the director echoes everyone that 7 Investigates spoke to for this investigation.

“We simply do not have enough psychiatric care for the need in our communities.” For many Wisconsin counties who don’t have the access to a facility like NCHC, the need is even greater.

Whether it’s more beds, a more standardized process, or other solutions like non-law enforcement transports, Wisconsin attorney general Josh Kaul tells 7 Investigates that medical experts and others are weighing in on how to best streamline the emergency detention process.

“I think, quite likely that there's going to be a need for some legislative change and potentially some funding from the legislature to provide greater access to services around the state,” Kaul said.

Ultimately, the problem is bigger than law enforcement budgets and a lack of resources. For Wausau police chief Ben Bliven, it’s about the trauma a citizen goes through while waiting for psychiatric help.

“The other piece of that which I think is more important is the impact that the process has on those people that are in crisis. We’ve taken people as young as eight years old on emergency detention,” he told 7 Investigates. They’ve had 903 crisis calls through September of this year, with 129 of them turning into emergency detentions, and 75 of them leaving the county. According to that same data, 29 transports out of county—mostly to Winnebago—were for juveniles. In 2018, 49 out-of-county transports were under 18.

North Central Health Care Crisis Services--serving Marathon, Lincoln and Langlade counties--is on track to receive nearly as many total youth calls to the crisis line as in 2018, projected to hit almost 600. In 2018, there were 606, according to data provided to 7 Investigates.

Note: For a summary of the data results of the DOJ research study, click the attached links to this article.