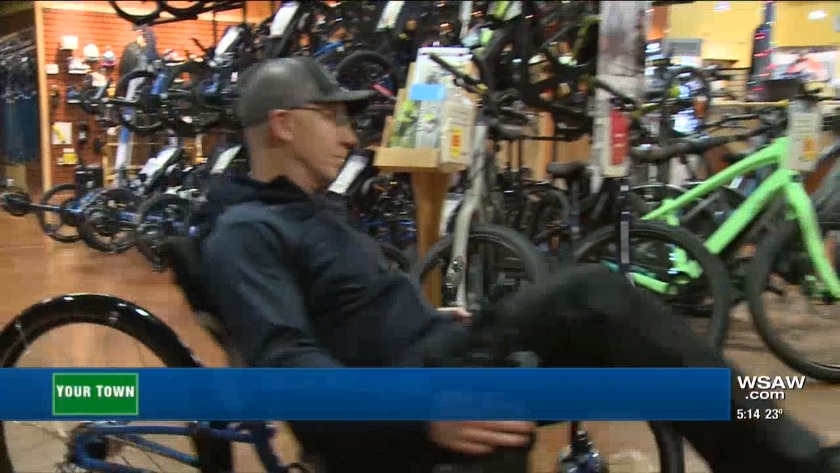 STEVENS POINT, Wis. (WSAW) -- Time has a way of changing things. Hostel Shoppe has been around in Stevens Point since 1974. It started off as a cross country ski shop that transitioned into a traditional bike seller. That transition, however, is not the only thing that time changed.

"In the 90s," began current owner of the shop, Breanna VanDeHey, "the previous owner noticed he was having some difficulties riding traditional bikes with two wheels and he started doing some research and came across recumbent bicycles."

Ever since, Hostel Shoppe has been nationally known as a place with a large variety of recumbent and adaptable bikes and trikes where everyone can sit back and take a ride.

"Almost universally, they sit down on one and they smile. It's like riding on an easy chair," sales associate Chris Walker said.

Walker is an avid biker, but said there was a three year period where he could not ride because of a bad back. Then he turned to recumbent riding.

"Being able to be comfortable on a trike and really just able to ride with my wife again is what this allowed me to do," he said.

"We can't really change the rider, but we can help adapt the bike to the rider to make them comfortable," said Hostel Shoppe manager, Scott Cole.

There are seemingly endless adaptation accessories that can make riding accessible. A pedal pendulum, for example, can allow for legs to pedal in smaller circles so knees do not have to bend as far. Electric assists let people who may not have the same strength or energy to go on longer rides than they would with a fully man-powered bike. People can add straps to leg joints so people who have had a stroke can keep their legs and foot in line with the pedal.

A very basic recumbent model can run as low as a thousand dollars, but it also offers riders an opportunity they may not have otherwise. They have said customers who are otherwise bound to their homes are able to get out, often improving their outlook on life, especially with the numerous trails the city offers.

Walker said a customer that came in caught him by surprise.

"She just enjoyed being on the trike and riding around and it wasn't until after they had left with a trike that we found out she was 94 years old," he said.

While recumbent bikes and trikes have a reputation of being low, Hostel Shoppe features numerous models that sit as high as a typical chair. The stability of the three-wheeled trike also helps to prevent riders from tipping even in rougher terrain.

Your Town: Delta Dental enjoys giving back to the community

Your Town: Delta Dental enjoys giving back to the community