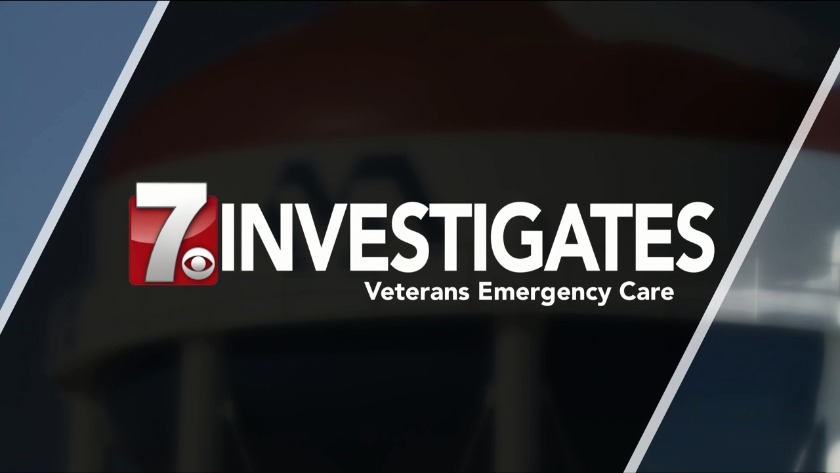 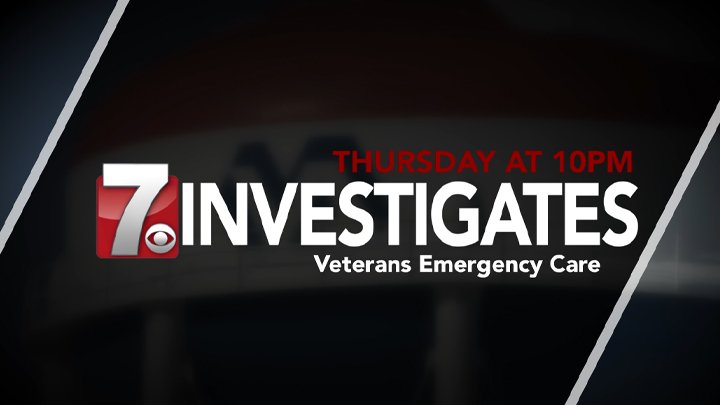 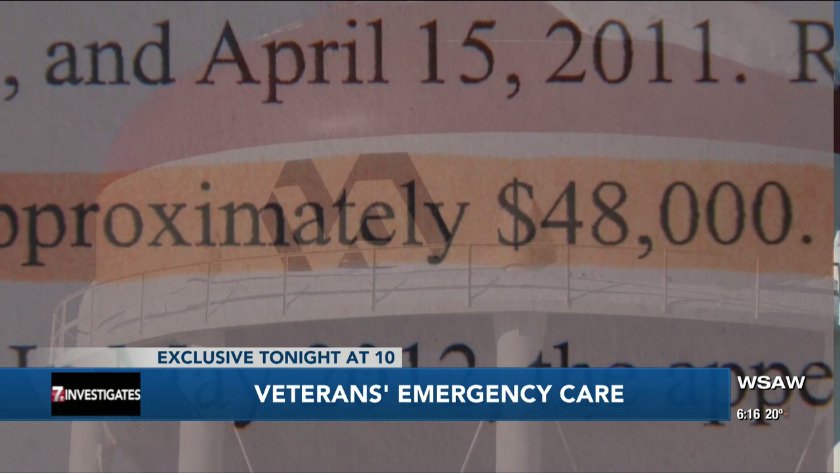 ST. CLOUD, Minn. (WSAW) – Department of Veteran Affairs representatives said only a single $12 reimbursement has been paid under the law meant to stop the VA from denying payment for non-VA emergency care, a congressional aide familiar with specifics of a meeting between congressional staff and the VA tells 7 Investigates.

That law is called the Staab Rule.

Today, the veteran behind the national case that changed the law still remains without a refund from the U.S. Dept. of Veterans Affairs.

“Well, the heart was pounding. And I thought if I would sit down and rest, it would go away. But it didn’t. So they called the ambulance,” Staab said.

It would end up being life-threatening. Staab would survive emergency open heart surgery at a non-VA hospital in St. Cloud, Minn., after suffering a heart attack and stroke. He could not communicate for months.

When it came time to pay his bills, the VA cited the federal Veterans Emergency Care Fairness Act. The law includes directing how the agency is expected to reimburse veterans for non-VA emergency care.
Under their interpretation of that law, the VA said because Staab had Medicare as other insurance covering part of his non-VA emergency care, they would not reimburse him for any of the remaining $48,000 in bills.

“It’s wrong what happened. And I don’t see how all the GIs would know what you need to do to be covered,” Staab said.

Looking back at some of his basic training pictures from 1952, as the Korean War veteran recalled his current VA struggle, he also remembered the promise his country made to him.

"You enlist with us. You get to have all health care taken care of. And this, and that. That was the big thing back then," Staab said.

A large part of Staab’s story can symbolically be seen in Staab’s lawyer Jackie Schuh’s St. Cloud, Minn. Office. Schuh is a veteran herself. This mission is personal. Multiple legal filings, medical records, and appeal pleadings show the journey of VA denials representing the Staab case for most of the last eight years.

"There's nobody that should be put in the position that he's been put in where they have to come up with $48,000 to pay for emergency fees,” Schuh said. “When they are promised when they sign the dotted line or do their 20 years that they're going to be free from that result. It's ridiculous."

"So it's got to be fixed. I mean it's sad to say what has been promised to Dick, and all the other veterans who have that vested benefit, is not what they're receiving," the lawyer added.

After years of legal fights, in 2016 the United States Court of Appeals for Veterans Claims ruled in Staab’s favor.

Judges said back in 2010, when Congress had changed the law, they intended for the VA to act as a "secondary payer," when veterans' other health insurance only covered part of their non-VA emergency treatment.

Last year, what was thought to be a final clarification of this statute called the ‘Staab Rule,’ named after Richard Staab, was finally put into law.

"And so the Staab Rule made it unconstitutional, or perhaps illegal is a better way to say it, to have the VA implement denials internally when the law required they grant the request for coverage," Schuh said.

During the course of this 7 Investigates three-year investigation, a House Veterans Affairs Committee spokesperson confirmed in January 2018, more than one million Staab Rule-related veterans’ claims were waiting to be processed.

However, that number differs from VA spokesperson Randal Noller’s confirmation in February 2018. Noller said 217,000 veterans are impacted nationally—which included 5,442 Wisconsin veterans. Refunds, Noller said at that time, would add between $165 million and $298 million to their budget during the next five calendar years.

However, an unnamed VA Public Affairs spokesperson told 7 Investigates in October 2018 that once the Staab Rule was published and all claims were processed, they could not answer how many veterans had been refunded.

“These claims became part of our normal workload,” the VA Public Affairs email said. “They are not tracked separately.”

In February 2018, Noller could not answer how many veterans waiting for refunds had died.

“The VA is unable to determine how many Veterans with denied claims since 2010 have died,” Noller wrote.

That is significant. Under federal law, once a veteran dies their benefit dies with them.

Publication of Staab: An unforeseen obstacle

He previously was part of the team representing Staab nationally, and is now fighting the VA's emergency care denials with a class action lawsuit.

While Staab's court victory specified the VA has to pay the remainder of a non-VA emergency bill, even if a veteran has other insurance, the NVLSP claims that is not happening and says the VA is rejecting claims anyway.

"The problem with the new regulation is the VA came up with a different reason for why they shouldn't reimburse veterans who have some private insurance," Stichman said.

The class action suit also claims the VA circumvented Congress by adding the words “deductibles and coinsurance” to the part of the Staab Rule allowing the VA to not cover co-payments.

"And the VA is trying to drive a Mack truck through that minor exception. So that everything you could possibly reimburse a veteran for, is not subject to reimbursement," Stichman said.

Staab: Life is a battle

Even after Richard Staab had a law named after him, he still does not have his refund.

“Should you cry for all the other servicemen who haven't got their just?” Staab asked. “It's just not me. It's all the other ones."

Based on his case, he and his lawyer do not think any other veteran has a refund either.

“I’m angry about the whole thing. I’m angry for my client. I’m angry for the thousands of others,” Schuh said. "This impacts every military member. Past. Currently serving. And in the future, until it's fixed,"

Schuh says to look no further than Staab surviving another stroke in 2017. The VA is now using his own law, the Staab Rule, to cite cost shares or deductibles associated with his other health insurance to reject payment for his non-VA emergency care.

"I just can't believe, in my heart, that that would've been Congress’ intent," Schuh added.

So Richard Staab, this one Minnesota veteran, chooses to continue fighting this epic battle—hoping that someday he, and the hundreds of thousands of other veterans he represents, will finally see justice.

"Life is a battle, isn't it?" Staab said matter-of-factly, with a veterans’ conviction in his voice. "And you've got to have hope. You made the right decisions. And let's face it. Not everything goes that smooth."

Calling for a law change

Staab's lawyer and NVLSP, the national group behind this class action lawsuit, say if the claim is unsuccessful, than the law needs to be changed. They say Staab’s story shows how major loopholes remain within this system.

Democratic Sen. Tammy Baldwin's office tells 7 Investigates that Baldwin is working with the NVLSP "on a legislative fix that would strike the provision in the law that the VA is misinterpreting to not pay for emergency care costs that veterans' other insurance plans don't cover.”

During the last three years, 7 Investigates has also shared stories of veterans, with only VA insurance, afraid to go to their closest ER because of inconsistent billing messages from VA representatives.

Baldwin's office said once the VA makes an update to what's called their “Access Standards” early next month, the senator's office plans to submit comments asking the VA to pay for all emergency room visits.
The senator’s office said if the VA does not comply when they finalize their regulations, she will introduce legislation to require them to do so.

Citing the ongoing lawsuit, representatives from VA Public Affairs had no comment.

Congressman Sean Duffy's spokesperson Mark Bednar said because of the lawsuit, Duffy also had no comment.

Sen. Ron Johnson's spokesperson did not return our repeated request for a statement.

He would also like to see lawmakers address the VA’s 72-hour rule, which requires veterans inform the VA within 72 hours of receiving non-VA emergency care, or the bill might not be covered

"Well what's being forgotten is the fact that you’re a serviceman. And if all of a sudden he's in a bad way and needs hospitalization, he’s got to have enough sense to call the VA," Staab said.

For information on the class action lawsuit click here.