The Latest: Subcontractor in vicinity of Wisconsin explosion 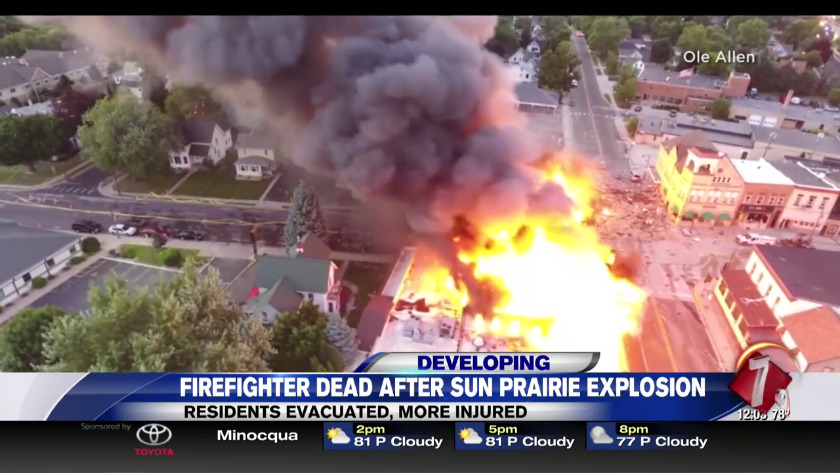 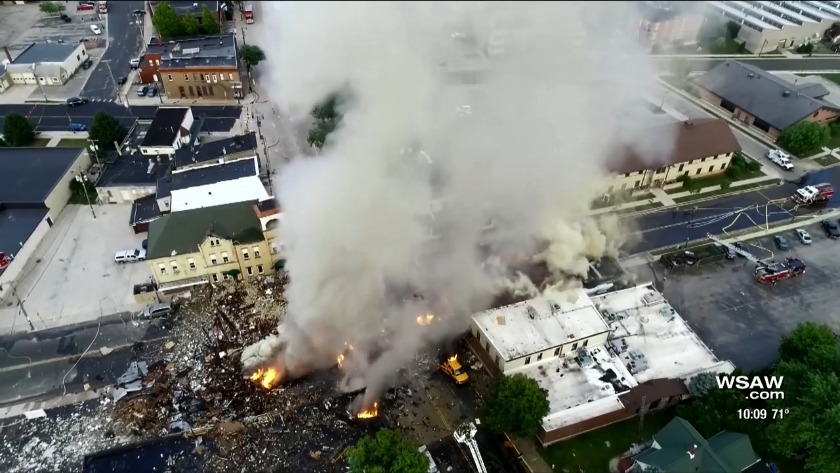 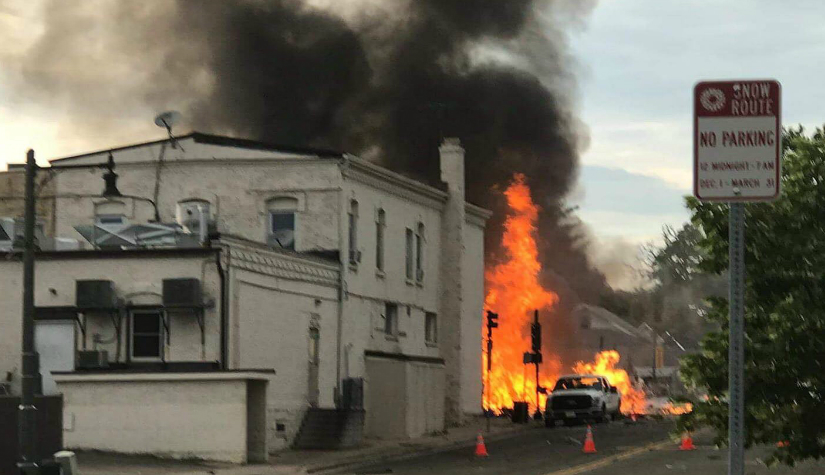 SUN PRAIRIE, Wis. (WSAW/AP) -- A communications company is clarifying where its subcontractor was working when a natural gas explosion killed a Wisconsin firefighter this week.

Authorities say a crew ruptured a gas main in downtown Sun Prairie on Tuesday, leading to an explosion that devastated a half-block and killed firefighter Corry Barr.

Verizon Wireless said Thursday it had contracted with Lawrence, Kansas-based Bear Communications for a fiber project in Sun Prairie. Bear released a statement Thursday saying a subcontractor was working "on site" but gave no details.

A Bear spokesman says the subcontractor was working in the "vicinity" of the explosion. He says the workers were evacuated ahead of the blast. He declined any additional comment.

It's unclear whether the subcontractor was responsible for rupturing the line.

---------
Wisconsin Gov. Scott Walker is expressing his condolences to the family of a firefighter killed in a massive natural gas explosion.

Authorities say a contractor ruptured a natural gas line in downtown Sun Prairie on Tuesday evening. The gas somehow ignited, leading to an explosion that leveled half a city block and claimed the life of 34-year-old Sun Prairie Fire Department Capt. Cory Barr. He leaves behind a wife and twin 3-year-old girls.

Walker toured the rubble Wednesday evening and spoke at a news conference in a city park. He offered his love and prayers to Barr's family and children. He also praised firefighters and police who evacuated dozens of people from the area before the explosion.

Sun Prairie police Lt. Kevin Konopacki said authorities are in the midst of an in-depth investigation to determine how the line was ruptured and what sparked the explosion.

The wife of a Wisconsin firefighter killed in a gas explosion says she couldn't have asked for a better husband.

Sun Prairie Fire Department Capt. Cory Barr was killed Tuesday when a natural gas explosion leveled most of a city block, including the tavern Barr owned.

His wife, Abby Barr, released a statement to The Associated Press on Wednesday afternoon saying he had been a firefighter for 15 years and was the "best husband a girl could ask for."

She says he lived his life by the motto "happy wife, happy life." The couple was raising a pair of twin girls who just turned 3. She says the girls would run up to him screaming "Daddy's home!" whenever he walked through the door.
------
11:25 a.m.

Firefighters are doing a secondary search of buildings damaged in a fatal explosion and fire in the southern Wisconsin community of Sun Prairie, although officials say they have no reports of any missing people.

One of the five buildings that sustained significant damage was owned by the firefighter who was killed in the explosion and fire, Cory Barr.

The Sun Prairie Police Department says people who were evacuated within a-half mile radius of the explosion are being allowed back in their homes once they have been cleared by a representative of We Energies.

The utility says a contractor punctured a gas line Tuesday evening causing a leak that led to the explosion and fire about a-half hour later.
------
11 a.m.

A union leader is identifying the Wisconsin firefighter killed in a gas explosion as a man who also owned a tavern that caught fire the blast.

Mahlon Mitchell, president of the Professional Fire Fighters of Wisconsin, on Wednesday identified Cory Barr as the firefighter who was killed.

A contractor punctured a natural gas line in downtown Sun Prairie on Tuesday evening, leading to an explosion and ensuing fire that damaged at least five buildings, including the Barr House, which Barr owned.

Patrick DePula owns a restaurant just down the street from the Barr House. He said he's known Barr for several years. He said Barr was very proud of Sun Prairie and wanted to both preserve the city and transform it into a travel destination.

Police say an initial sweep found no new victims in the buildings damaged by a fatal explosion and fire in the southern Wisconsin community of Sun Prairie.

Sun Prairie police Lt. Kevin Konopacki says there have been no reports of people missing following the gas leak and explosion blast Tuesday evening that killed a firefighter and injured more than a dozen other people.

Officials say at least five structures were damaged. Authorities have cordoned off a half mile (0.8 kilometer) radius from the blast zone downtown.

We Energies has said a private contractor struck a natural gas main, causing a leak. The explosion and fire followed about half an hour later, raining fiery debris on downtown streets, igniting vehicles and sending a plume of smoke into the air that could be seen for miles.
------
6:25 a.m.

One firefighter has died and another was critically injured in a gas explosion and fire that leveled several buildings in downtown Sun Prairie.
Authorities said at an early Wednesday morning news conference that at least six firefighters were injured along with some civilians when a private contractor struck a natural gas main about 6:30 p.m. Tuesday.

Firefighters arrived to investigate the leak and cordon off the area. The buildings exploded a short time later raining debris in the downtown area. The fire resulting from the explosion ignited some cars parked in the area.

A plume of smoke could be seen for miles around the community of 30,000 near Madison.

A police lieutenant in a suburb of Madison, Wisconsin, says no deaths have been reported after an explosion rocked the downtown area but that authorities will be searching buildings.

Lt. Kevin Konopacki says two firefighters and a police officer were injured Tuesday in Sun Prairie when the blast occurred. He says some civilians suffered minor injuries but none needed to be hospitalized.
He didn't know the exact number of civilians hurt.

The explosion happened after a contractor struck a natural gas main. Firefighters and police in the community of about 30,000 had responded and Konopacki says an evacuation was underway when the blast occurred.

A WE Energies spokeswoman says workers for a contractor apparently punctured a natural gas main, sending gas leaking into a building ahead of the explosion.
------