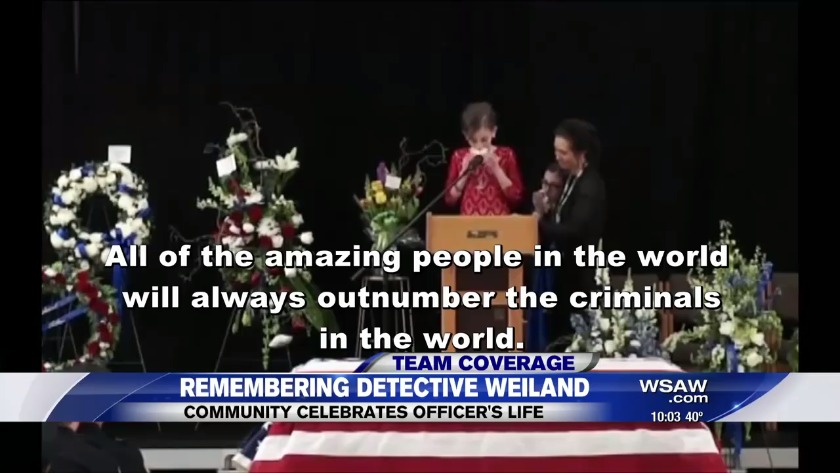 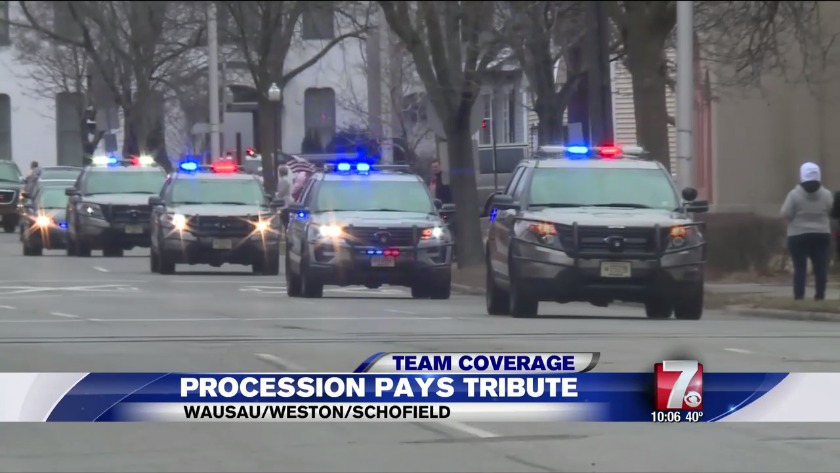 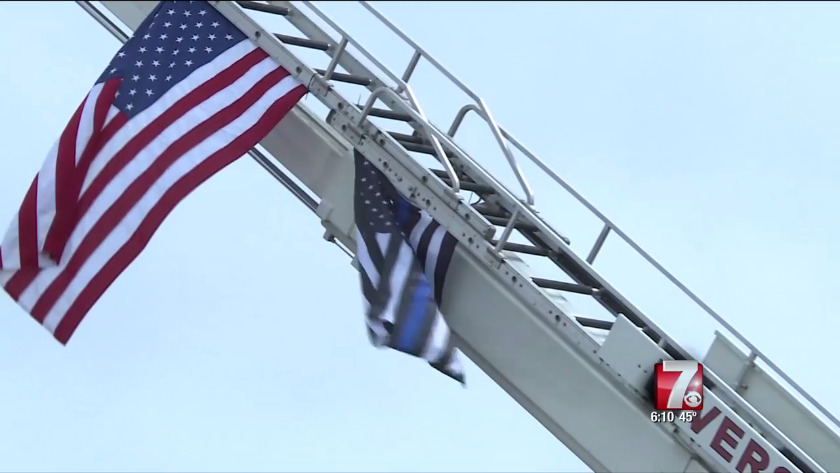 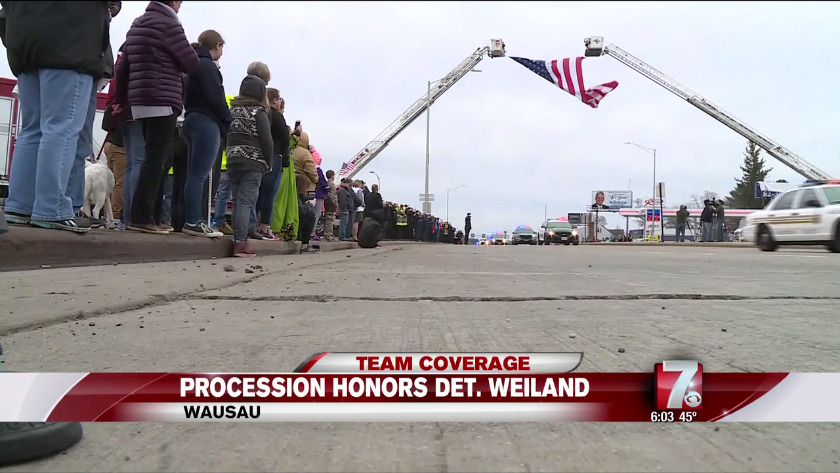 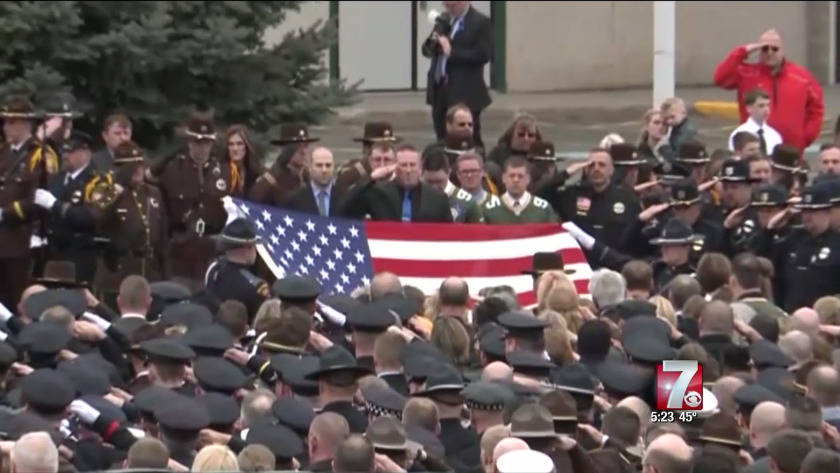 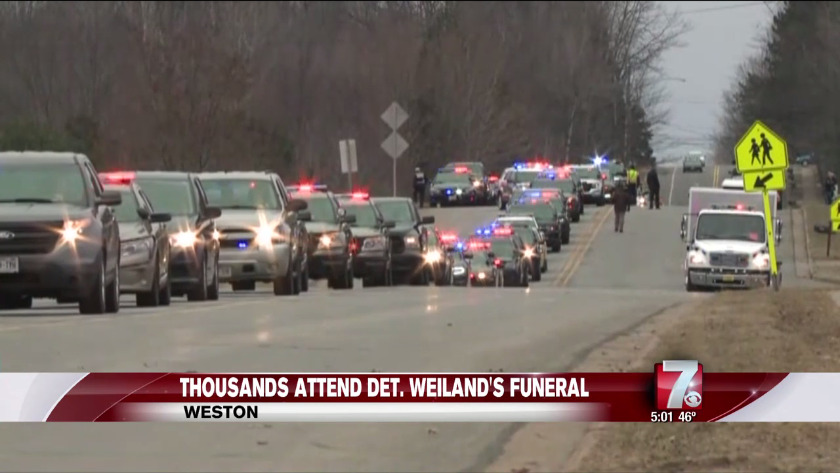 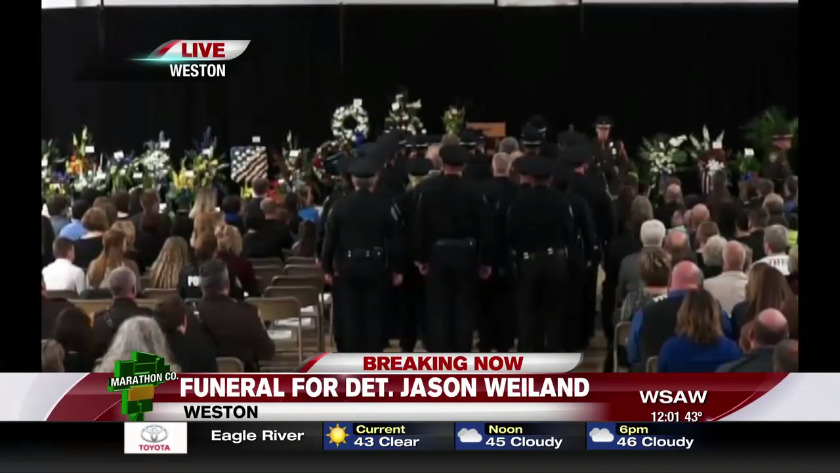 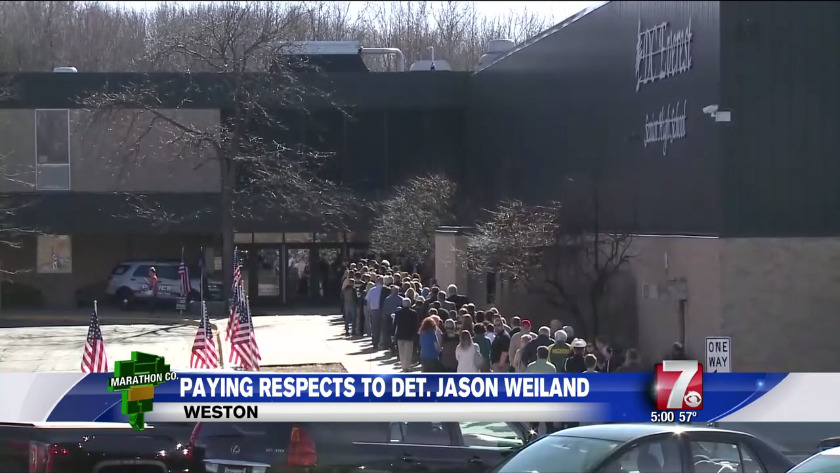 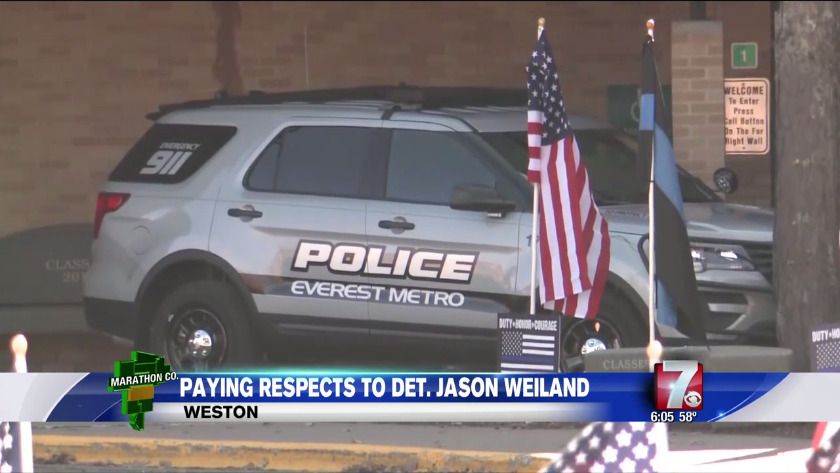 WESTON, Wis. (WSAW) -- Thousands of people including family, friends and law enforcement attended the funeral of a detective killed in the line of duty. Detective Jason Weiland, 40 was killed March 22 while responding to the scene of an active shooter in Weston.

His funeral was held at D.C. Everest High School.

Those who spoke at Jason's funeral included his daughter, Anna. She recalled memories of her dad including camping and their father-daughter dance.

"My dad really did give his life to everyone in Wausau. I love seeing everyone supporting the four victims with blue ribbons, signs and blue lights, cards and everything else," she shared.

"Courage is genetic. And she gets it from both sides," explained Pastor Gerald Morris, of First United Methodist Church.

The Wisconsin Honor Guard Association expected anywhere from 2,000-3,000 to pay their respects during the visitation and funeral .

Jason's father, Thomas Weiland also spoke. "It's God's will that Jason is with Him," Thomas said courageously.

"There are very few people that walked into my life and have changed it for the better. Jason was one of those people," explained retired Wausau Police Detective Greg Hagenbucher. He shared that the two had a close friendship. "Brother, friend, hero," he continued.

"Don't worry about your family, we got this," Hagenbucher said speaking to Jason.

"Jason was champion of victims," said Everest Metro Police Chief Wally Sparks. "I ask that you keep all of the victims and their families in your prayers." He said they've received support from departments all over the U.S. and Canada.

"He would always find a way to add levity, even in the most trying circumstances,' Chief Sparks recalled.

"This life is not the end. How could something so insignificant as death put an end to love and courage?" asked Pastor Morris. "We should have had more time, but every moment that we had was a gift".

Law enforcement from across the state are volunteering help out with things like traffic duty, so that local officers can pay respects to Detective Weiland.

Near and far-- law enforcement agencies from all over the county attended Weiland's funeral.

"This is my second one [officer funeral], it definitely touches home being it's right here in Wausau," explained Mallori Piotrowski, an officer from the Wausau Police Department. "It definitely doesn't get easier, hits home."

Around 20 area fire departments also came to show their support.

"They call it brotherhood for a reason, and it's truly unbelievable," said Capt. Jeremy Pozinski of the Maine Fire Department.

Wanda Thieme of Wausau felt compelled, like many, to pay their respects to someone who gave their life protecting the community.

"It kind of chokes you up," Thieme said. "I think that it's just a very patriotic thing that shows what everybody is coming together and what it stands for is a community."

Sargent Mark Tushaus of the Brookfield Police Department said while honoring every person's life is important, they have a special bond in their line of work, which is why they want to help honor the fallen
"We have that special uniqueness and bond and when something happens to one of us whether they are sick or fall in the line of duty we d come together just to show that dept, pay our respects, support the family,” explained Tushaus.