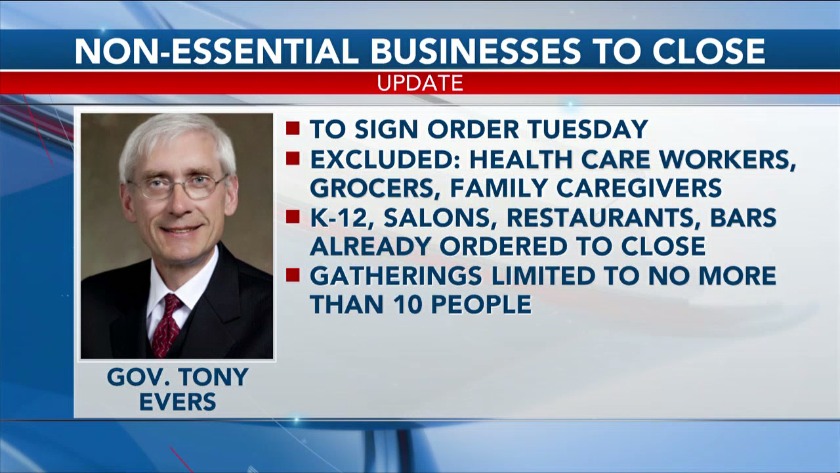 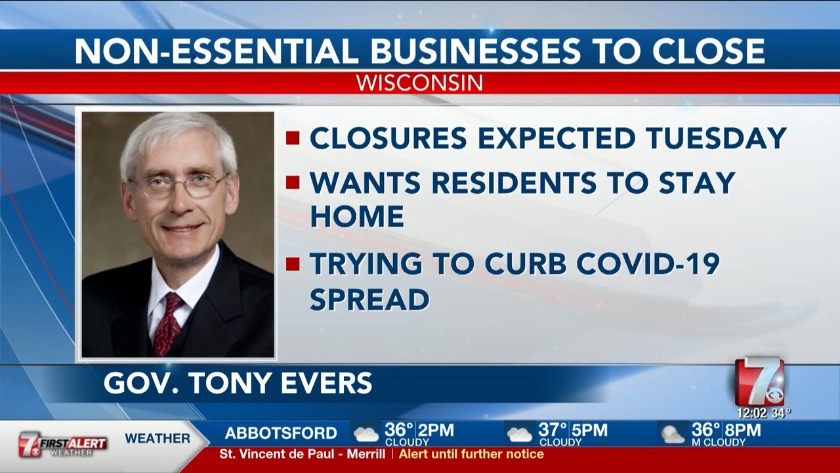 MADISON, Wis. (AP) — Wisconsin Gov. Tony Evers is ordering the closure of all non-essential businesses starting Tuesday, and urging people to stay at home to slow the spread of the COVID-19 virus that has killed four people in the state and infected at least nearly 400.

Evers tweeted Monday that he would be signing the order on Tuesday. It comes after Evers already ordered K-12 schools and a host of other businesses closed, including bars, restaurants and hair salons, and limited gatherings to no more than 10 people.

But the newer, tighter restriction mirrors what other states have done, including neighboring Illinois, to try and force people not to leave their homes or interact with others unless absolutely necessary.

THIS IS A BREAKING NEWS UPDATE. AP’s earlier story follows below.
Jury trials in Wisconsin have been postponed until the end of May and in-person proceedings have been suspended statewide through at least April 30 in an effort to protect public health and keep courts operating during the coronavirus outbreak, the state Supreme Court has ordered.
The Supreme Court said Sunday that trials scheduled to begin from now through May 22 will be rescheduled until after that date. The announcement came the same day Wisconsin health officials said the state’s confirmed cases jumped by 100 cases, up to 381. Four people in the state have died from COVID-19, the disease that’s caused by the virus.

The Supreme Court said judges, clerks and others are required to use email, teleconferencing and videoconferencing in lieu of in-person courtroom appearances through at least April 30. An exception for in-person proceedings can be made if remote technology isn’t practical or adequate, and it’s up to the presiding judge of each circuit court to determine when exceptions can be made.

The Supreme Court also postponed oral arguments that were scheduled for March 30 and April 1.

For most people, the coronavirus causes mild or moderate symptoms, such as fever and cough. For some, especially older adults and people with existing health problems, it can cause more severe illness, including pneumonia.

Meanwhile, citing an increased risk of exposure, the city of Milwaukee has ended in-person early voting, but is still accepting absentee ballots by mail. The city said its Election Commission can no longer maintain sufficient staffing levels to keep the three early voting sites operating safely.

Scores of local leaders sent Wisconsin Gov. Tony Evers a letter Sunday warning him that the state isn’t doing enough to protect voters from the coronavirus as the April 7 election approaches.

There will be additional details soon about what this order means for you, but I wanted to give everyone the opportunity to prepare and plan ahead so you can help do your part to keep our friends, neighbors, and communities safe.

Court processes continue during pandemic, some hearings put off

Court processes continue during pandemic, some hearings put off