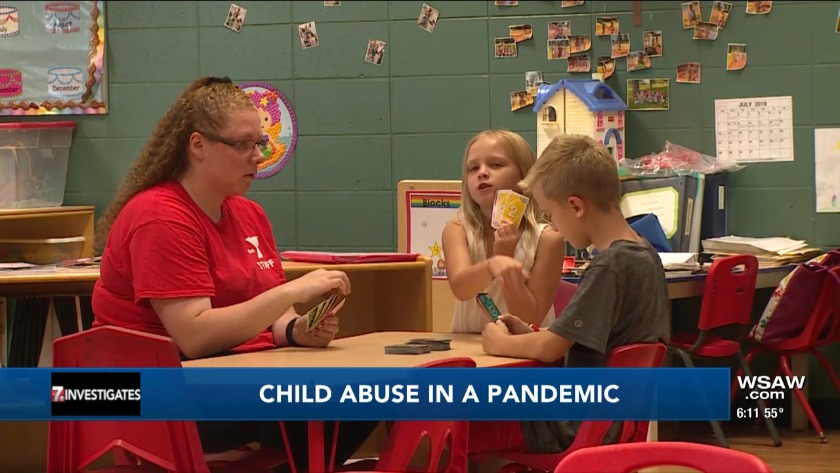 Outbreak stress may lead to abuse

MARATHON COUNTY, Wis. (WSAW) -- While we face an unprecedented reality in the face of the COVID-19 pandemic that’s sweeping the United States and the globe, children could be caught in the middle of a far more silent crisis. In the wake of Governor Tony Evers’ order shutting down schools days after Wisconsin’s first positive COVID-19 case, child abuse reports have dropped by about 20% across Wisconsin.

Experts, however, fear that the reality for at-risk children now largely isolated in homes away from the watchful eyes of mandated reporters is much worse.

“Without having those teachers there to have a place to go and talk about what’s happening in their homes or to talk about possible scenarios where they’re unsafe, they’re left without anybody to report that information to,” Marathon County Social Services’ CPS supervisor Christa Jensen explained.

Statewide, child abuse reports for the month of March decreased by between 18 and 23% in comparison to previous years from 2017 to 2019. Because March usually sees a decline in reporting due to spring break, 7 Investigates analyzed statewide data from the Department of Children and Families for each March from 2017 through 2020. On average, child protective services across the state are contacted with more than 7,000 initial reports of suspected maltreatment each March. But last month, that number had dropped to about 5,800 reports.

That trend is echoed in Marathon County, which saw upwards from 150 initial reports of maltreatment for the month of March in 2018 and 2019. But this year that number dropped to 118, a decrease of 20 to 34%, depending to which year the data is compared. Initial reports have not yet been screened in, Jensen noted, the process through which case workers determine whether an allegation of abuse is credible.

In pure numbers, it’s not that different from the way reports decline during the summer months when students are out of school. But experts fear that abuse is actually rising during the pandemic, due to parents and caregivers functioning under a much higher level of stress—yet the dropping number comes because there are no longer ‘eyes and ears’ to report.

“We’re suspecting that those cases are actually increasing due to that isolation and that extraordinary stress,” Jacqueline Gremler with the Child Advocacy Center serving central Wisconsin noted. “Those children are not getting opportunities to tell safe adults what’s happening so those people can intervene.”

Gremler is a forensic interviewer for the CAC, conducting interviews with children suspected of suffering maltreatment. Those interviews are used as evidence for prosecutors, law enforcement, case workers and others working on child abuse cases. Data from the DCF shows reports most frequently begin with educators during the winter and law enforcement during the summer. But currently, Gremler says the CAC is being contacted more often by a different type of reporter: parents themselves, who are undergoing severe stress and are afraid they’re going to hurt those under their care.

In some cases, Gremler said, they’ve already hurt their child.

In the COVID-19 era of social distancing and stay-at-home orders, that’s no longer a possibility. However, experts want parents to know they’re not alone in the crisis.

“If you’re feeling stress, if something has happened, please reach out,” Gremler said. “We’re here to help.” The MCSS points parents to a “warm line” operated by the Children’s Hospital of Wisconsin, 715-315-1943. Parenting aids answer the phones, where they help talk parents through a stressful scenario and either help deescalate the crisis or alert the proper authorities.

Relieving stress to reduce likelihood of abuse
Children and families most at risk for abuse during the pandemic are often going to involve parents who already have difficulty managing stress, according to Jensen. In those situations, MCSS case workers are increasing contact, both physical and virtual where possible, with families where there are ongoing cases. However, that’s not an option for children who have not yet been reported. For them, experts encourage the community to keep their own eyes and ears open and report when there is a concern for a child’s safety.

“The isolation really impacts anybody’s ability to see these children, where there might be concerns present,” Jensen said.

“It’s just really important for parents to know they’re not alone, that this is temporary,” Gremler said. She has recommendations for parents who are struggling to balance the added pressures of a global crisis, a changing or lost job, and children who are no longer able to attend their schools. Taking a break and stepping aside is okay—not a cause for guilt.

And children who are acting out in ways that are unusual for them isn’t a reflection of parenting, she explained. Increased temper tantrums for younger children and irritability and withdrawal for older children is likely their attempt to communicate their feelings and reactions to a world they aren’t accustomed to.

“Depending on child development, young kids all the way through adolescence, their responses to this pandemic are going to be really different,” Gremler noted. She recommends shielding children, especially younger children, from the amount of news and current information that’s available about the pandemic.

“It’s just a pressure that they don’t wholeheartedly understand.”

Rural Wisconsin hospitals already operated at narrow or negative margins. Will they survive the pandemic?

Rural Wisconsin hospitals already operated at narrow or negative margins. Will they survive the pandemic?