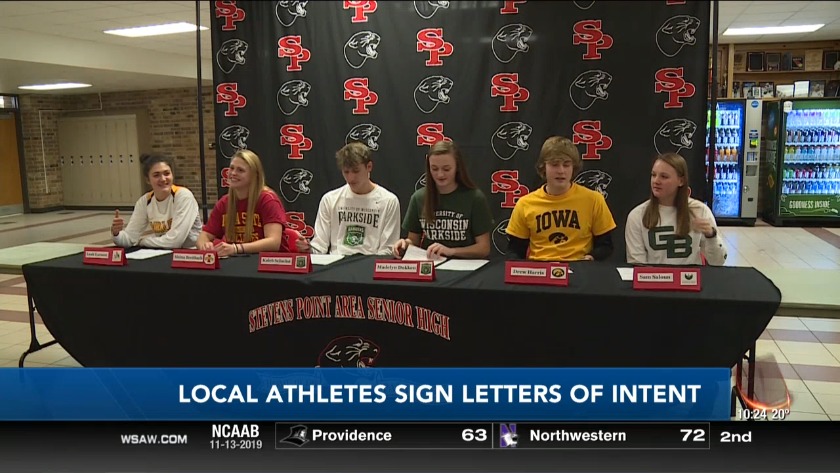 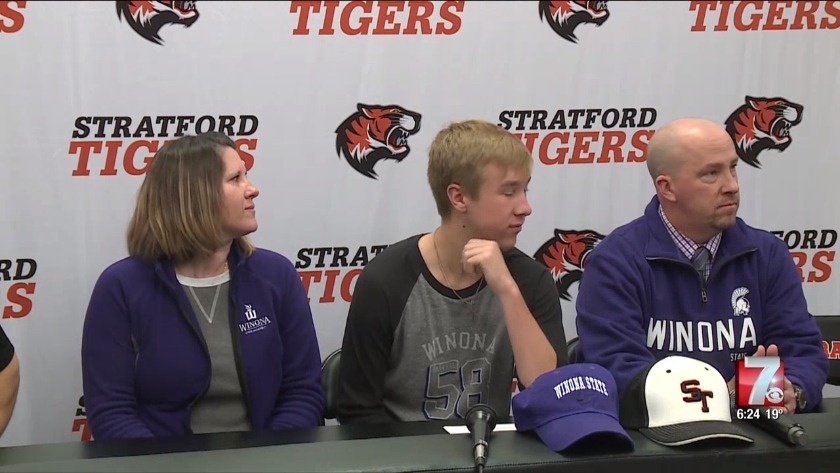 WAUSAU, Wis. (WSAW) On National Signing Day, many athletes from the area signed their letters of intent to take their athletic career to the next level in college.

It was a busy day at SPASH with four D-I commits.

Leah Earnest has been a basketball star for the Panthers, she'll head to Valparaiso University in Indiana next year to get some more buckets.

"It checked all my boxes, there was nothing about Valpo that I disliked,” said Earnest. “The coaches, and the teammates, and just all the people that are super supportive, and just super great people, I could just see myself fitting into that program."

Let's take a dip into the pool, Alaina Breitbach will swim for the Iowa State Cyclones

"You know I think Iowa State was just everything that I was looking for in a school,” said Breitbach. “It was such a long process, I'm not going to lie, from last August, so it was about a year and a half of my time."

Same sport, same state, but for the arch rivals, Drew Harris will swim for the Iowa Hawkeyes.

"I was talking to them since last fall,” Harris said. “After taking a visit there a couple of weeks ago I just fell in love with the campus, and loved everything they had to offer."

Not all Panthers are leaving the state, Sam Saloun will play softball at UW-Green Bay.

“It's super exciting to have all my family and friends here,” Saloun said. “Just to see all the support, and just kind of to know that it's official is super exciting."

Now to D.C. Everest with two D-I commits, Maddie Simpson is headed to the SEC where she'll be an Auburn Tiger.

"Going down to Auburn reminded me a lot of home, and the weather is so nice down there,” Simpson said. “It doesn't snow half the year, I mean even more."

Staying closer to home, Maisie Gelhar will run track and field for UW-Milwaukee.

"Being in Milwaukee, I've been there for so many volleyball tournaments and stuff like that,” Gelhar said. “I have family that lives down there too, so it was really kind of a draw to them."

Now to Antigo and the defending state champs in baseball, Brady Renfro will also be a Valparaiso Crusader.

"The academics at Valparaiso were great, and I really liked all of the coaches and the facilities,” Renfro said. “I felt like I could grow there more as a player and as a person."

On the Division-II level, Wausau East has two commits to Winona State University. Taylor Pagel will play volleyball for the Warriors, while McKenna Taylor will run cross country there.

“It definitely helps me relax a little bit more knowing that Taylor is going to be in there,” said McKenna Taylor. “I'll at least know one person going in besides the team."

"Definitely going to college is kind of scary because you don't know anybody,” said Pagel. “So having McKenna, somebody I know, and somebody I can talk to and already know from past and previous years, is pretty awesome."

Joining them at Winona State is Stratford’s Chandler Schmidt, who signed his commitment to play baseball there today.

"It was kind of first visit and talking to the coaches, it kind of felt like home right away,” said Schmidt. “I really enjoyed the program. I enjoyed talking to the coaches. We seem like we have a bright future ahead of us. They just brought in five freshman that throw the ball pretty well, and they're pitchers. I just thought it's close to family, too, so it seemed like the right fit."

Staying on the diamond, Everest’s Haley Larson will play softball at UW-Parkside.

"At first I didn't know if I wanted to go far away from home cause it's about three and a half hours away, so it was a little far away from me,” said Larson. “But I really love the game, and I wasn't going to pass up an opportunity to play at a higher level."

"Our state tournament run was awesome, you know big accomplishment, we all loved each other,” said Voelker. “Now for me to go on and play at the next level is absolutely amazing, it's been fun."

Newschannel 7 congratulates all local athletes who signed their letters of intent today.

The Caufield brothers are back together

Ramczyk returns home, reflects on special bond with his father

The Caufield brothers are back together

Ramczyk returns home, reflects on special bond with his father